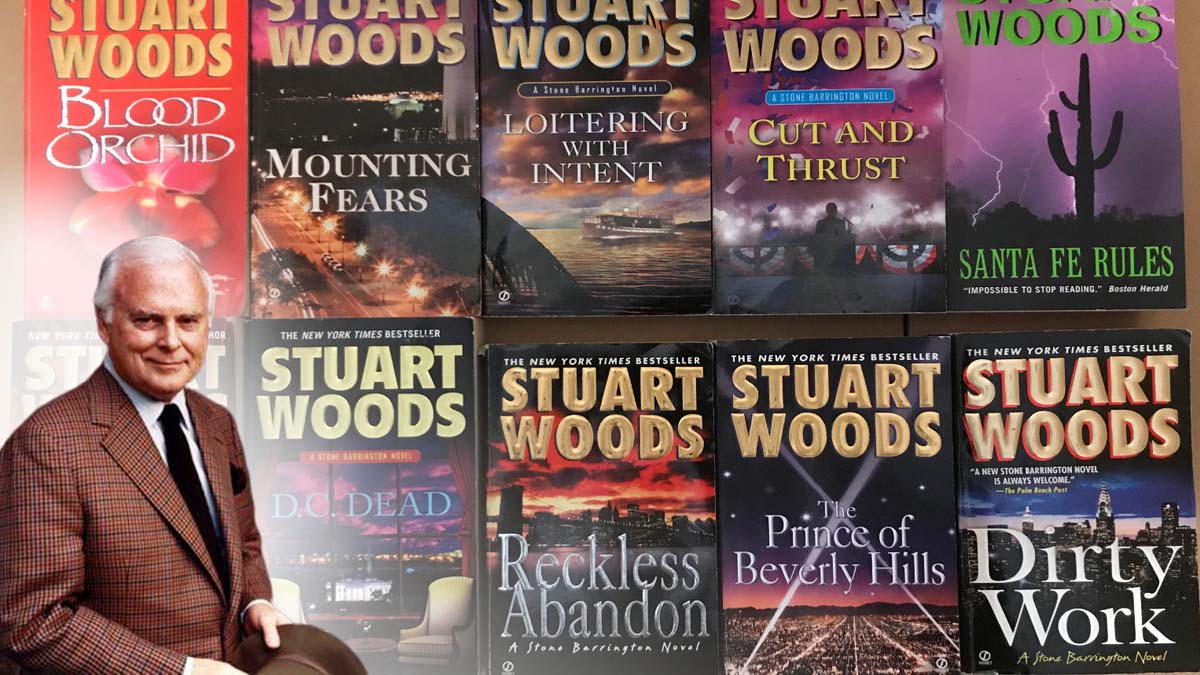 Yes, you found it! the place with all Stuart Woods books in order, this author has so many books that you made a great choice trying to find a list so it would be easier for you to read his work. AS you might probably know already, Brad Thor has different known series such as the Wil Lee series or the Stone Barrington series. But there is way more,the only thing is that in order to enjoy his books you will need all Stuart Woods novels in order, but that’s why you are here after all isn’t it?

This author has so many different series that you will probably discover a new series by Stuart Woods, who knows,maybe one of these will become your favorite series ever? but let’s focus now, here you have all stuart woods novels in order:

stuart woods books in order, all his series in publication order

You will find below all the series and standalone books written by Stuart in order of publication.

As a reminder, if you click on the book cover of any of his novels the link will take you to Amazon (it will open in a new tab).

Let’s start with Stuard Woods books in order for his Will Lee series:

Run Before the Wind

Stuart Wood’s longest book series is his novels centering on Stone Barrington, here goes all this series in order:

Dead in the Water

Shoot Him If He Runs

Regaring the Rick Barron Books this is the publication order for this series:

The Prince of Beverly Hills

This is the reading order for the Ed Eagle series:

In case you want to read the Holly Barker books:

And this is his last series, the Teddy Fay books:

Stuart Woods has written several stand alone novels, here you have them in publication order:

A list with all stuart woods books in order

If you would rather prefer a list containing all Stuart Woods books in order here you have this one. It includes the year of publication and if it’s part of a series, so this way it will be way easier for you to follow:

Le’s get to know the author better, shall we?

His debut as an author couln’d be better, since he won the Edgar award in 1981 with one his first novels, Chiefs. According to Woods, he got the idea for this book when he was nine or ten years old, he found a shoe box with some memorabilia and in that bok he found a brass policeman’s shield that had been half shot away with buckshot, such a shield had belonged to his grandfather, William Henry Callaway.

He has been asked if Stone Barrington was based on a real person or if he came out of his imagination. For which Stuart Woods answered that he is a fictional character, and that by the time he started writing the first novel centering on this character, he only knew one New York Police Department detective.

Stuart Wood estated during an interview that at first, when he wrote Chiefs, he got the names for his characters by writing downs the names of all the merchants on Main Street in his hometown. Then he mixed up the first and the last names. Lately, he used friend’s names or just makes them up.There are also other few times in which a character from his novel is named after the winner of a charitable group auction, Stuart Woods said that someone paid $5,000 to have his name in one of his novels (L.A Dead)

Stuart Woods is a private pilot,as well, as a sailor. He enjoys red wine, having a preference for California cabernetes and chardonnays, however, he does not have a particular favorite.

Two of his books, Chiefs, and Grass Roots, have had an adaptation into a TV miniseries One of them, Chiefs, is available from Netflix.

There you had it, all Stuart woods novels in orderand we also learned quite a few things about his life and his work. In case you liked this post, you will surely enjoy this article with all Brad Thor books in order.