How to read Dune series by Frank Herbert

All who have read Dune will agree that the first volume is one of the best science fiction novels of all time. If you decided to start reading the Dune series I can only congratulate you. Because you will not regret. In this post, you will be able to check the proper reading order of Frank Herbert’s appraised work. In case you want to have a better intro of this universe, check Introducing Dune.

Did you know Dune is having a movie adaptation? check Dune upcoming movie then for more info! so make sure you read the books first, here you will find Dune books in order, you still got time to read them!

What is the proper reading order for Dune?

As it happens with other long series, there is a bit of controversy regarding the proper order to read this series. Some say it is best to read them in chronological order, meanwhile others think it is better to read them in published order… if you ask me, in this case, I think you should start reading this saga by the one book that made Dune series to be known as one of the best science fiction novels ever, that is,  starting by the first book published: Dune.

So, in my opinion, you should read first the original series. This is the story of Paul Atreides and the planet Arrakis, where the priceless spice named mélange, sometimes just called “the spice,” is grown. Even though it is usually said that Dune is a series of six novels, for me at least, it is more like a three-book original saga and a three-book sequel. I say this because centuries pass between the third book, Children of Dune, and the fourth, God Emperor of Dune, so I think think they should not be considered at the same level.

Here you have the Dune original saga books in order:

This would be like the basic pack, the must-read I would say. If you read these three books you will know how the story of Paul Atreides concludes. Of course, Dune keeps being alive after him.

Where can I buy Dune original series?

If you want to start reading this series, you only have to click on the following images to buy Dune books (Wottaread is an Amazon Associate so these links will take you to Amazon):

If you are willing for more Dune, and trust me you will, you have way more to read. Following to Children of Dune you have what I call the three-book sequel.

Unfortunately, the latest book, Chapter House: Dune, ends with a cliffhanger and since the author died the next year after this book was published,1985, he left a lot of the plotlines unsettled.

However, this matter was somehow resolved by the two next novels written by Brian Herbert, Frank Herbert’s older son, and Kevin J. Anderson (spin-off novel writer for Star Wars or Starcraft among others and also known for his work The Saga of Seven Suns).  Please notice that, from now on, all the novels mentioned are not written by Frank Herbert but by his son and Kevin J. Anderson.

Still want more? At this point, the reading order gets more and more complicated, two prequel series, and sequel of one of those prequels…none of these will be Frank Herbert’s work as previously explained,

The first prequel is set just before the first published book, that is, before the Arrakis conflict. These books are narrated from the point of view of three noble houses, which give the name to each manuscript:

While the first prequel happens just before the first Dune novel, this prequel narrates a story occurring thousands of years before.

That would be all, there are also short stories but we will leave it there from now. If you are willing for more Dune just leave a comment and I will provide you more info about the short stories!

In which order should I read Dune books? Dune books in order

So, here is a summary for my suggested Dune read order. First of all, I recommend you read the original work by Frank Herbert, at least the first three books. After you have finished with all his original work you can read the sequels and lately Legends of Dune and its sequel. As a result, If you read all of these books you will become a Dune god and people will kneel to your divine presence.

Here you have Dune books in order: 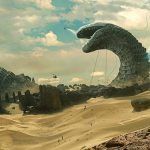 Now you have Dune series order. Hope this article helped you!

4 Comments on "How to read Dune series by Frank Herbert"