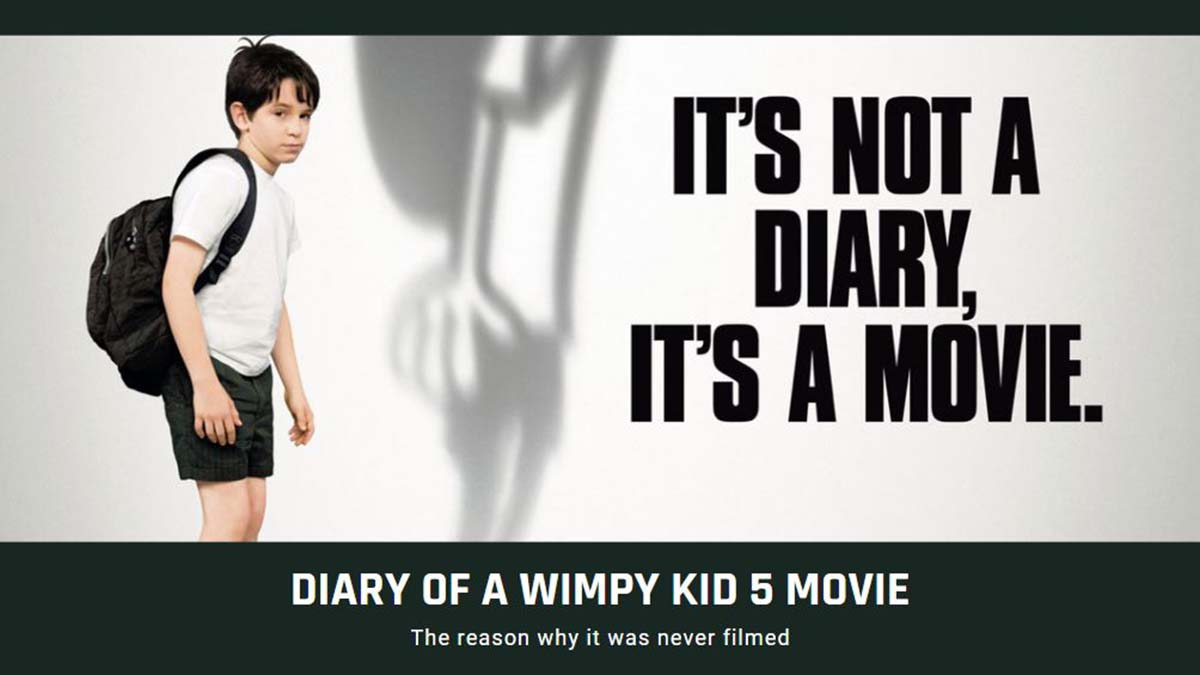 The Diary of a Wimpy Kid 5 movie: why they didn’t film it?

Lots of kids and parents are willing to watch the Diary of a Wimpy Kid 5 movie in theatres, a film series based on the best-selling books by Jeff Kinney. The fourth movie, The Long Haul, was released in 2017, so where’s the next one? well, it is time for you to know the truth: there won’t be more live-action movie adaptations of this series.

But why? it is time for you to discover why. But before, in case you want to keep enjoying the hilarious adventures of Greg, here goes a great alternative:

In case you haven’t read the books this may be a great time for you do to so. They are way better than the films, here you have the first five. The Diary of a Wimpy Kid 5 movie would have been based in the fifth volume of this series, in case you want to know what would have happened if they had filmed it:

There are lots of more books in this series, you can take a look at this post where you will find the Wimpy kid books in order. But before you start binge-reading them, let us tell you what happened with the live-action movies.

Why the Diary of a Wimpy Kid 5 movie was never filmed?

It may have occurred to you that the reason why there won’t be more films in this series might be because they didn’t perform well in the theatres. A fair assumption, given that it’s one of the main reasons why film series are canceled, such as the case of The Dark Tower 2 movie for example. But was this the reason for The Diary of a Wimpy Kid films? let’s find out.

But before, if you want to watch these movies nonstop, you can get them here:

The first movie adaptation of these books was released in 2010 and was directed by Thor Freudenthal. It had quite a decent performance, having a budget of only $15 million dollars, the film grossed $75.7 million worldwide. Quite good, don’t you think?

But what about the sequels? the other 3 were directed by David Bowers, and here’s their performance:

As you can see, Rodrick Rules and Dog Days had a similar performance to the first movie, despite having a slightly larger budget. The Long Haul, however, didn’t do that well. Funnily, the author of the book series was involved in the fourth movie as a screenwriter (of course, by no means this implies that his involvement was the reason why the movie didn’t work as well as its prequels).

What about the receptions?

This might be shocking to you if you enjoyed the movies. But truth is that none of the four movies had a great score according to critics. The first movie has a score of 56 out of 100 according to Metacritic, the second and the third one have a similar score.

The last one, The Long Haul, has the worst score of all. Getting a 39 out of 100. As you can see, had not a great reception, the general opinion is that they were just decent. Therefore, the decrease in grossing seen in the last movie compared to its predecessors together with the bad scores might have been the reason why the producers decided not to film a Diary of a Wimpy Kid 5 movie.

Do you agree with these scores? leave a comment rating the movies from best to worst and tell us which scores you think each of these films deserve.

Is there any chance there will be a diary of a wimpy kid movie 5 any day?

There won’t, the last film in this series was released in 2017, therefore, the actor who played Greg Heffley in the last movie, Jason Drucker, might be a bit too old for the role since he is now 16 (he was 12 when the movie was released). However, it is true that in the first three movies the main role was played by Zachary Gordon, so they could just get a new actor.

Additionally, Disney Plus announced that they were producing a Diary of a Wimpy Kid movie. However, it will be an animated film this time. Are you excited about this news or maybe you preferred the live-action ones?

Did you enjoy these movies? leave a comment telling us which one was your favorite!