Hello wottareaders! today we are interviewing John Bierce, author of Mage Errant series.  Need magic? this is the series you are looking for then! Let`s know more about John Bierce and his books:

Who is John Bierce, not the writer, the man. What can you tell us about you?

I’m a huge nerd. I cannot get enough science fiction and fantasy in my life. I’m also a huge science and history buff, pun fan (though I’m bad at making them), environmentalist, and a truly terrible cook. I also have an excellent mustache (think Lemmy from Motorhead or Union general Ambrose Burnside) and a nonzero quantity of tattoos.

I was born in Kansas, smack-dab in the middle of the United States. I don’t think that there’s any way to escape the places you live affecting your stories- even down to a level as fundamental as your word-choice and language. But… I’m not really actively drawing inspiration from the United States or Kansas- there are so many other places and cultures that I want to explore other than, you know, Midwestern American. My Jewish roots, for instance,  or the history of the Indian Ocean Spice Trade,  or geology, are all way more interesting to me as an author.

So this is a little weird, but reading Stephen King’s Misery in late middle school/ early high school. I’m not a masochist, so it might seem a little weird that a novel about an author being kidnapped and tortured would inspire me to become a writer, but it was really the first time I ever heard an author talk about their writing, their process, their lifestyle, etc. It really struck a chord in me, and it just grew stronger over time. I went down a lot of false starts on the way- I thought I wanted to be a high school english teacher, then a historian of medieval Europe, then a historian of the intellectual development of Europe, then a geologist (which, if I hadn’t made it as an author, would have actually played out- my geology degree is so close to completion. Being a research scientist is one of the only other careers I could see myself being happy doing.)

I study science and history pretty devotedly! I mean, I guess those are pretty book related, though. Hmm. I love to hike, camp, swim, travel, and… well, read a lot. Books are a huge part of my life.

You announced on your blog that you are now a full time novelist, congratulations! How has your life changed after this?

Well, I got to quit my awful dayjob as a grocery store greeter, which was pretty amazing. I’ve actually been able to afford to go to the doctor for the first time in years, which is pretty nice.

Most excitingly, I’m about to go digital nomad- I can write anywhere so long as I have a laptop, so I’m just going to start traveling full time. It’s honestly cheaper to travel the world full time than to rent in a West Coast American city if you do it right. First stop, Thailand! (I love Thai food so much.)

Your series, Mage Errant, is a story full of magic. Which is your favorite magic trick ever? And magician?

Honestly, it’s any magic trick you do for babies. Endlessly adorable reactions. And magician… I don’t have a favorite real life magician (most stage magic isn’t really my thing), but for favorite fictional mage, I’d have to say Ged, from Ursula K. LeGuin’s Earthsea series. Or maybe Rincewind, from Terry Pratchett’s Discworld.

I already mentioned how I was first inspired to dream about becoming a writer (Stephen King’s Misery) but the day I started working on Into the Labyrinth, well… I’d been trying to break into the comic book industry for a few years now, and I’d reached a really frustrating spot with that- things were going really slow there, I wasn’t currently in school, my freelance writing work had dried up and I’d had to pick up aforementioned awful dayjob as a grocery store greeter (it was like getting paid to be in timeout, I swear). One day, I ran out of the wizard school books I  was reading to keep myself distracted, and, well, I decided I needed to write one. I then proceeded to marathon write the entire book at nights and on the weekend, basically not having a social life until it was done. The rest is history.

I aim for 3k words per day. On a really good day, I sometimes do two or three times that many words, but that’s not super common.

Not directly, but many of my characters are influenced by people I know.

Mostly just doing editing on Mage Errant 3 and prepping it for release. Getting ready to start writing a standalone epidemiological fantasy novel soon, though! Then after that, on to Mage Errant 4.

Hah, this question is giving me massive impostor syndrome. Uh… I’d say my best moments involve fans reaching out to tell me how much they enjoy my series. It still feels weird to hear, but really good. My worst moment… I had a friend end our friendship over my novels. It was pretty awful, but, well, someone who isn’t happy for your successes really isn’t that good of a friend in the first place. 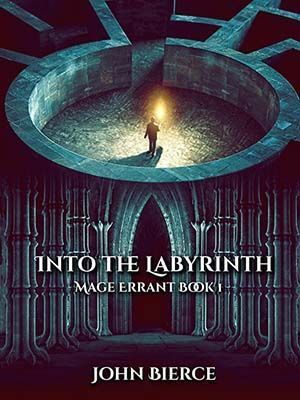 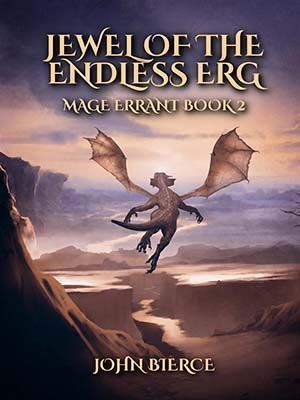 This series narrates the story of Hugh of Emblin, a guy who can barely cast any spell, his life changes drastically when a mage chooses him as an apprentice. This is a world of magic and wizards, what makes your series special and unique?

I’m especially proud of my magic system- I put a lot of work into it, and I think it’s a pretty solid one. Makes for some wonderful action sequences, and it’s extremely versatile. Special or unique, though… I dunno. I wasn’t trying to have the most original series ever (it wouldn’t have been a magic school series in that case), I was just trying to write a solid, enjoyable story.

A magic school, wizards… Will Harry Potter fans find in this series a great alternative?

Well, I certainly don’t want to replace Harry Potter- I love it far too much for that- but I think that the heavy influence of Harry Potter on Mage Errant will mean that quite a few Potter fans will enjoy Mage Errant.

The second book in the series, Jewel of the Endless Erg, is a great follow up in the series. Lots of new elements: pirates, monsters and a dragon queen! Is this the perfect summer for Hugh?

Oh, definitely not. Hugh’s perfect summer would involve lots of lazing about and hanging with his friends, with absolutely nothing resembling an adventure.

How long do we have to wait for more of Hugh and his friends? Any idea when the third book of the series will be released?

Book 3, A Traitor in Skyhold, will be out August 20th, alongside the combined audiobook publisher’s pack for books 1 & 2. (Narrated by Ralph Lister.)