Wottaread
Reacting to news No comments

The stolen Harry Potter prequel: a What if

Did you hear of the of the stolen Harry Potter postcard two years ago? for those who didn’t, here is a small excerpt of the original article posted on Mugglenet (see here).

A rare piece of Harry Potter memorabilia has been stolen in a high-profile theft. During a Birmingham break-in during the month of April, a postcard hand-penned by J.K. Rowling featuring an 800-word story about James and Sirius was stolen, along with some jewelry.

This postcard was won for 25 thousand pounds (32,35$ thousand) in a raising funds auction and was stolen in 2017. The same J.K Rowling asked the fans not to buy it but, let’s be honest here, that postcard is such a valuable item for a fan so there is no way the burglar didn’t have tons of offers to purchase it. What about you, would you have bought such postcard if it was offered to you?

But this news is pretty old, why bring it back if nothing new has happened? they didn’t find the burglar nor recovered the postcard. So why this post?  well, as I posted this  Tweet yesterday,  it was just a joke, then I started thinking… 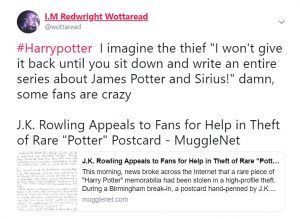 What if the burglar was a hardcore Harry Potter fan? somebody who loved the series and just had to get such postcard no matter what. When I posted that tweet I realized how this would have been different if the burglar was somebody obsessed with this saga.  Someone whose love for Harry Potter had turned into fanatism. Which by the way, I don’t think is the case since he (or she)  stole some jewels too. It seems to me that the robber just thought the postcard would be worth a lot of money in the black market and since the stealing mode was on he also got the jewels.

But let’s assume it was a Harry Poter hardcore fan. Somebody who stole it only to make a demand: a Harry Potter prequel. Of course, why would the police or J.K Rowling herself accept the demands of a burglar? no reason at all. Nonetheless, it wouldn’t be the burglar’s demand what would pull the trigger but the fan reactions.

It would be similar to what happened to the Deadpool movie, a project that was discarded by Fox until test footage was leaked on the Internet.  People loved it and, as a result, the Deadpool movie not only exists but raised as much as most of  the MCU movies despite having a way lower budget (58$ million, just compare it with Guardians of the Galaxy 232.3$ million budget, which by the way grossed less than Ryan Reynolds’ movie)

See what I mean? it was the fans, and that filtered test footage, that made Deadpool real. I just thought how unusual it would have been if such robbery had been made in order to make such a demand and had led to a Harry Potter prequel.

Would a Harry Potter prequel be a success?

Honestly, I don’t have the slightest doubt. People would love to read about Hogwarts again, Fantastic Beasts tries to get some hold of it but, let’s face it, it’s simply not the same. Don’t get me wrong, Grindelwald’s story is decent, but a story about Harry Potter’s parents has so much potential. We know how their sad story ends, but still, we want to know every single detail, how Lily fell in love with James Potter; the adventures of Moony, Prongs, Wormtail, and Padfoot or, why not, the rise of You-Know-Who, a younger Dumbledore… everything about this wizarding world!

Now, I assume J.K Rowling knows that writing a prequel about James and Lily Potter, Sirius Black, Snape, etc would be a Bestselling saga but I guess maybe she wants to write about other things. Which is totally understandable of course. True, the book sales would be shocking, but I don’t think it’s a matter of money anymore (if it was at any point) since she is one of the richest British celebrities in the world.

At least a movie series?

Even so, if J.K Rowling doesn’t want to write anymore about Harry Potter why not a movie series then? just like Fantastic Beasts. I see two ultra potential movie sagas here. One, the story of James Potter, his friends, and his wife. But also, let’s not forget about Lord Voldemort (yeah, I dare say his name!). What about a saga telling us about the Dark Lord? It would be such a different approach and yet so interesting. Hogwarts from the point of view of Tom Riddle, a kid chosen to be in Slytherin who would eventually raise as the most powerful wizard ever. My god, make this real, please.

Hope you enjoyed this article, If you are craving for some magic at this point you can check these books like Harry Potter. Keep reading. Here you have all the Harry Potter books in order as well.