The Witcher universe keeps getting bigger. The story, written by the Polish author Andrzej Sapkowski is gradually becoming a media phenomenon. And this is only the beginning. In 2017 Netflix announced The Witcher was having an eight-episode tv show on their platform. An upcoming show which will undoubtedly increase the popularity of this saga even more.

First came the video games, the action role-playing video games developed by CD Projekt Red which incredibly raised this series popularity. More specifically, it was the third game, The Witcher 3: Wild Hunt. By the way, if you played the video games only, you might want to consider reading the books then see The Witcher reading order. This game had such commercial success and critical acclaim it made the Witcher books being translated into multiple languages.

Just so you can understand the impact better, the books were already popular in Poland and Russia for example.  Meanwhile, there was not even an official English translation for the entire series. This, of course, changed after the video games success, now you can find all the books in English.

Therefore, it is fair to say that the video games helped immensely in increasing the popularity of this saga and also boosting the sales. As a result, The Witcher caught the attention of Netflix.

Despite being announced in 2017, the official release date is 2019, as you can see in the official Webpage. Meaning, we are getting close! Unfortunately, there is no specific date, not even a month. But, it is said (unofficially), that release date will be by the end of the year.

Not much revealing, how do you feel about this trailer? fits your expectations?

Netflix uploaded another trailer and it looks way better than the previous one:

Not only Heny Cavill is way more better characterized and therefore is a more convincing Geralt of Rivia. Also we finally can see how the story will go.

It is confirmed that The Witcher Netflix will follow the books and not the videogames developed by CD Projekt red, as a result there will be some differences. One of the most notorious differences for the gamers will be the fact that Geralt only carries a sword on his back, a fact that also happens in the books while in the videogames he always carries both swords on his back.

There are already a lot of confirmations in the cast list. The main character, Geralt of Rivia, will be featured by Henry Cavill, an actor you probably already know since he is (or at least was until recently) the portrayal of Superman.

The cast also includes  Freya Allan as Ciri and Anya Chalotra as Yennefer, actresses whose names are not as big compared to Cavill. Other characters are already cast, which you can see here.

Here is the official cast: 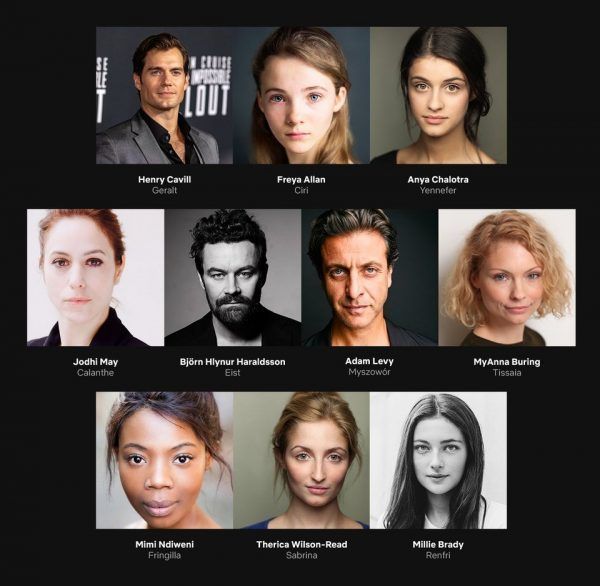 Stop looking, they are not in that image 😉. Jaskier (Dandelion) and Triss Merigold will be featured by Joey Batey and Anna Shaffer respectively:

Regarding the plot, there is not much revealed yet, only the brief summary (almost a description) posted on the official Webpage:

“The witcher Geralt, a mutated monster hunter, struggles to find his place in a world where people often prove more wicked than beasts”

But we already knew this right? Other sources don’t reveal much more, seems like they want to keep it as secret as possible.

There is a leaked script though, about two Yennefer scenes.  Which you can see here

Despite this, the executive producer and showrunner of The Witcher Netflix, Lauren S.  Hissrich, confirmed that these scenes were for the casting process only.

For those concerned about the tv series adaptation, you will be glad to know that Andrzej Sapkowski is working on the Netflix adaptation as a creative consultant. This is a way to ensure that the usual elisions, inventive adaptations or character, which happen in every book adaptation, have at least the approval of the writer.

Seems like we won’t have to wait much more, if you didn’t read the books yet:  Start now!