A Little Hatred the new novel by Joe Abercrombie

Great news for all the fans of Jon Abercrombie and his high fantasy saga The First Law. His new book, a Little Hatred, will be released later this same year 2019.

What is A Little Hatred about?

A Little Hatred is the first volume of a new trilogy set in the same world as Abercrombie’s acclaimed saga The First Law. This upcoming trilogy is known as The Age of Madness, and the first novel, A Little Hatred, will take place 20 years after the original saga.

Luckily for all the fans, this new trilogy will have new characters but at the same time, old faces will make their appearance in this new story.

Not a lot of this new arch is known, but here’s a little excerpt from the author’s website:

“The age of the machine dawns, but the age of magic refuses to die. With the help of the mad hillwoman Isern-i-Phail, Rikke struggles to control the blessing, or the curse, of the Long Eye. Glimpsing the future is one thing, but with the guiding hand of the First of the Magi still pulling the strings, changing it will be quite another…”

The book cover has already been revealed as the author published it on his website (see here).

As you might have realized this book cover is quite different from the style used in both his saga and Stand-alone novels which showed a parchment cover. Do you like this new style? As the author himself states, seems that this format could not be developed further. Instead, they decided to move on and show a cover that relates more to this book’s premise: an industrial age.

This is probably because of the difference of both markets. Here is the US Book cover for a Little Hatred:

So different aren’t they? Even so, both book covers look really cool. The American version looks a bit more darker, while the English one emanates some kind of hope.

In my opinion, the English version looks way more unique. The American version, despite looking astonishingly good, is more like a standar book cover for a dark fantasy story.

Just an opinion, of course.

Which is your favorite? the American or the English version? Don’t forget to share and give us your opinion about your favorite book cover, I like to know what are your thoughts!

As Joe Abercrombie stated on both his Twitter account and his website, A Little Hatred will be published in the UK on September 19th and in the Us on September 17th.

Regarding the novels that follow a Little Hatred, which are The Trouble of Peace and  The Beautiful Machine, those will be published in 2020 and 2021 respectively.

If you want to buy A Little Hatred by Joe Abercrombie here you have a link to purchase it (This is an Affiliate Links since Wottaread is an Amazon Associate): 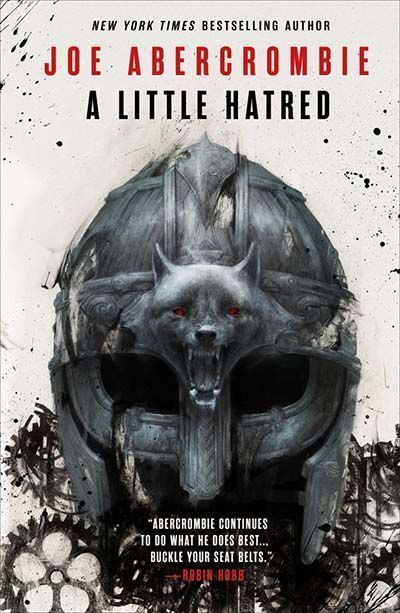 If you want to start reading this series and you don’t know which novel to begin with, taking a look at this article is all you need: The First Law series reading order.

Either you are a fan or not of this series hope you are glad about this news! if you didn’t know about this series you can start reading them before this new book gets published. You still got time!