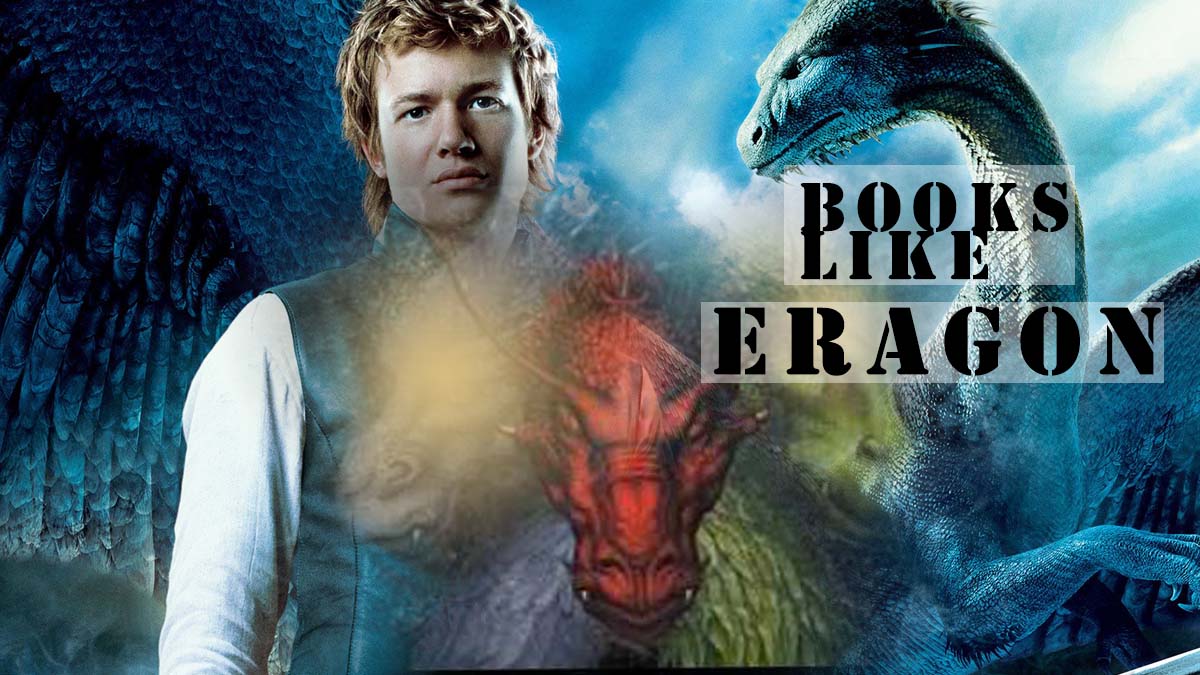 If you are seeking books like Eragon it’s because you fancy to read a new series with adventure, lots of action, and maybe dragons. Christopher Paolini’s series (known as The Inheritance Cycle) is a popular fantasy saga that had a movie adaptation of the first volume in the series, Eragon. Are there books similar to Eragon? the answer is yes, and you will find them here.

Imagine a world without fantasy. Ironically, the only reason why you could imagine that is because such a world doesn’t exist. Life would basically be colorless without our imagination. Everyone excises the power of imagination both young and old. But how does one expand his imagination? Well, Christopher Paolini has done a Justice to that. He did this by writing an epic fantasy novel, and he was only fifteen when he wrote Eragon, nice uh?

Eragon is the story of a farm boy who by chance discovers a dragon egg. Thi story also contains the typical ingredients of fantasy: an epic quest, romance, a special sword, and dragons. In a short while, Eragon became a best seller captivating several readers.

According to Paolini, he got his inspiration from a variety of sources. This means that it won’t be too hard to track down other books with a similar tone.

So if you wish to explore other books like Eragon, then you’re in the right place. Because in this article, we will be listing lots of books similar to Eragon with fantasy worlds and dragons. Let’s begin:

The Belgariad Series is obviously one of the best books to read after the Inheritance Cycle series. According to Paolini, he purchased all five books in the Belgariad series. He further said that the books occupied a place of honor on his shelf.

This series is a book similar to Eragon, the Belgariad introduces fantasy at its peak. It features the coming of age of a young farm boy who would become great.

The Sword’s Choice series by I.M. Redwright an indie book like Eragon

This story has a similar setting to the Last Airbender, since it has 4 kingdoms each of them dedicated to one of the Earth Elements. The main character carries a sword of fire, and has decided to face the world and visit all the other kingdoms to meet the strongest enemies. This story has not dragons, but it has a similar tone to Christopher Paolini’s fantasy, that is why it’s in this list of books like Eragon.

On the other side, we get to meet Vienne, a girl who becomes the heir to the Queendom of Water and therefore will have to prove she is worth wearing the crown by using the powers of her water sword.

This story centers on a young man named Shea Ohmsford who has to embark on a quest which is to find the legendary Sword of Shannara. This sword is the only way to defeat the evil Warlock Lord. Shea will have to believe in himself if he wants to prevail in his quest.

In case this series caught your interest, you will find this post with the Shannara reading order really useful.

The Age of Fire Series by E. E. Knight

If it is the dragons that made you love Eragon, then the Age of Fire series is worth checking out. It features a fantasy setting with elves, dwarfs, and several fictional races. However, dragons are the main protagonist of the story.

This story has several protagonists. One of which is a boy named Pug. He was adopted by a cook and lived an ordinary life. But all that was going to change when the court magician realizes that Pug possesses magical talent, therefore taking him as an apprentice.

This will be the turning point of how Pug becomes a very powerful magician in the land of Midkemia.

In the following article, you will find the order of Raymond E Feist books.

Dragon Rider is a novel aimed at young readers. But readers of all ages can also enjoy it. This story is about a Brownie, a dragon, and a human boy. Their quest is to find somewhere safe so that the dragons can relocate there.

The Scorched series was written by Mari Mancusi. It is about a young girl whose name was Trinity Foxx. Similar to Eragon, the young girl happens to possess the egg of a dragon. Although she was doubtful, she got convinced when a dragon hunter came from the future.

This book has young adults in mind. It was written by McCaffrey. The book is about the adventure of a 15-year-old girl named Menolly with an incredible talent for music. This series is similar to Eragon, and is sure to give you the kind of fantasy adventure you are looking for.

There you have it. I’m pretty sure the books listed above will expand your imaginations and keep you captivated until the very end.

Also, you can take a look at this article with a compilation of books like Percy Jackson, in case you like the series.

Do you know any other books like Eragon? don’t be shy and leave a comment with your suggestion, I will add it for sure to the list! let’s make a great list of similar books to Eragon together!