Hello Wottareaders! In this article, we are talking about Ender’s Game series order. These books are written by the American author Orson Scott Card. The first book in the series, the one who gives name to the saga; is known, among other things, for being a suggested reading for many military organizations, why? Let’s find out.

Also, in this post not only you will find Ender’s Game book order but if you like to collect books then you’ll discover a great Enders Game box set with more than 600 reviews as well, so read this post until the end so you don’t miss it! Are you concerned about the Ender’s Game reading level? keep reading to find it out.

Ender’s game series order: In what order should I read Ender’s Game?

Given that there are different series in the Enderverse some of them being parallel to the original work and also having more than one sequel series and prequels it makes you wonder what is the best Ender series order. In this case, there are two popular approaches to read this series: chronological order and publication order.

Here is you have the Ender’s game series in order of publication. In case you want to check any of these books you only have to clic on its cover (the link will take you to Amazon):

Now that you finally got the Ender’s Game series order, would you want to get a super cool Ender’s Game box set?

In case you want to get all the books of a series, then you can get any of this Ender Game box set, it has a 4.7 out of 5 stars rating and has more than 600 reviews.

This Ender’s Game box set is the perfect choice for you if you love science fiction and you like to collect books, it works great as a present as well.

You will find below a list with the Ender’s Game series order including to which series each of the novels belong to: 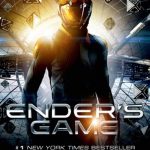 What is the Ender’s Game reading level?

The Ender’s Game reading level is grades Grades 3 to 12.

What is Ender’s Game about?

The first book in the series, Ender’s Game,  is a military science fiction novel that takes place in Earth’s future, in this our world is threatened by alien beings known as the buggers due to their insectoid form. The Earth has had already two invasion attempts by these creatures, humankind has to be prepared for the third invasion. As a result, a Battle School is created so the most gifted children can develop their abilities and eventually become commanders capable of defeating their invaders in the next conflict.

This book narrates the story of Ender, a gifted eleven-year-old boy with exceptional abilities that will grant him to join this Battle School and put his capacities to the test: he will face isolation, stress, and violence.

The next books in the series expand this story, providing new insights through the point of view of other characters and also telling events that happened before and after the third invasion.

Why is Ender’s Game so famous?

The book is written in a YA style, it tells the journey of a boy, Ender, who learns about the world and faces bullying and fighting authority In order to follow one’s beliefs somehow it makes you feel empathy for the main character. Also, Ender’s Game has a philosophical tone, with lots of intellectual references that make it more appealing.

As mentioned before, it is a suggested reading for military organizations like the United State Marine Corps because this book gives a lot of military lessons and leadership just as getting an understanding of when to delegate and use the abilities of each member of your team, and of course setting an strategy in order to defeat your enemy

Which Ender’s Game books are worth reading?

Ender’s Game series is composed of eighteen novels. The latest one, The Hive, was published on June 11, 2019, and belongs to the Formic Wars series. Ender’s Game saga is divided into different series, each of them narrating events related to war and military training. Together they are known as the Enderverse. Let’s know a bit more about the diverse sagas that compose this series:

This series begins with the first books of the series, the title that gives the name to the entire saga. Ender series is composed of six novels which tell the story of Ender.

Shadow saga series tell the same events as the Ender series, but this time told from the perspective of Bean, the best friend of Ender. This series has a more political tone, providing so a different approach and at the same time, it is more fast-paced than the original series.

This series is unfinished. The next novel, Shadows Alive, has no release date.

This series covers the events occurring in the First and Second Formic Wars. As a result, these events take place before Ender’s Game series. This series is written by Orson Scott Card and Aaron Johnston.

This series is also unfinished. The next novel, The Queens, has no release date.

This is a new sequel of Ender’s Game. Only one book has been published of this series, Children of the Fleet. This series focuses on the Battle School once the third Invasion has been avoided.

Which of these books are a must read?

Aside from the first book in the series, you should at least read Speaker for the Dead which is the second book in Ender series and also its direct sequel.

The rest of the novels are also good sci-fi books, but these two are mandatory if you want to enjoy Ender’s journey.

One thing to bear in mind while reading the rest of the books is that this series has a different tone and style depending on the book.

When was Ender’s Game banned?

Ender’s Game has been banned in some public schools in the United States due to the violence and offensive language.

Ender’s Game movie adaptation was filmed on February 27, 2012, in New Orleans, Lousiana. The movie is an adaptation of the first novels in the series, Ender’s Game. Originally, it was planned that the movie included events of its parallel novel, Ender Shadow, therefore showing elements of both novels but this was not so after the script was purchased by Lionsgate.

The role of Ender was played by Asa Butterfield, while Harrison Ford as Colonel Hyrum Graff. The film had a budget of $110–115 million and grossed $125.5 million. This movie adaptation has a score of 51/100 on Metacritic.

Will they make Ender’s Game 2?

No, there are no announcements about making Ender’s Game 2. In 2013 the actor who played Bean, Aramis Knight, said there was a script for Ender’s Shadow but the movie was never filmed. So, no, Ender’s Game film has not a sequel.

Since you seem to be a huge fan of the classics, you will enjoy this high fantasy series by Robert Jordan, here is the Wheel of Time book order. Also, you will enjoy the Percy Jackson series in order if you like to read Yung Adult Fiction.