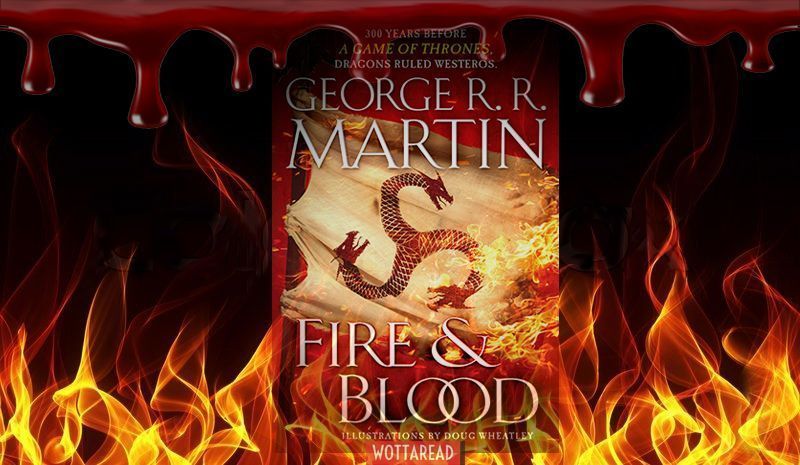 Amazing news! George R.R Martin recently published his new book. No, I’m afraid it’s not the long-awaited book The winds of winter (the planned sixth novel in the series A Song of Ice and Fire, which the author revealed wouldn’t be published in 2018) but it’s really close. Instead, the American author has published Fire and Blood (A Song of Ice and Fire). By the way, if you haven’t started reading this series, here you have a good reason not to read them yet…

What is Fire & Blood?

This new book is actually a prequel, telling a story 300 years before A Song of Ice and Fire plot (also known as Game of Thrones, if you are a fan of the TV series). This will be the first volume of two-part history, the second volume publishing date to be determined. It is 640 pages long, and it also eighty black and white illustrations by Doug Wheatley (a veteran comic book artist, concept designer, and illustrator) which, allow me to say, are astonishing.

Fun fact, this book is known as the GRRMarillion, a joke comparing this book to J.R.R Tolkien’s prequel of Lord of the Rings, The Silmarillion.

If you want to buy Fire & Blood by George R.R Martin here you have a link to purchase it  (This is an Affiliate Links since Wottaread is an Amazon Associate): 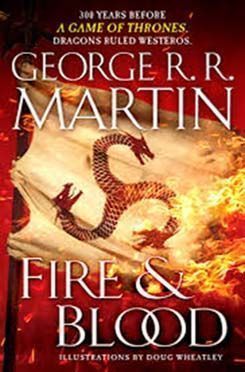 What is this book about

The cover already hints what this novel is about “300 years before A game of thrones dragons ruled Westeros”. Dragons, Westeros… Targaryen!

Exactly, this novel tells the fascinating story of The Targaryens. Remember them? the noble family who reigned for almost three hundred years in Westeros.

This saga will reveal some of the mysteries already introduced in A Song of Ice and Fire such as what happened in Valyria to be so deadly after the doom or what crimes Maegor the Cruel’s did to get such a name? But that’s not all, if you ever wondered how it was when Dragons ruled the skies now you will able to satisfy your curiosity!

Do I have to read it before A Song of Ice and Fire?

No, definitely not. But considering how long it is going to take until that saga is finished this book is a great way to make the wait shorter. This book provides really interesting information that was only slightly introduced in the original saga and also tells the story about such an acclaimed family as the Targariens are.

Of course, if you are a fan of the saga this book is just a must read.

How has this book been received by fans and critics?

For such a famous and loved saga the critics have been quite more diverse than one would expect.

Hugo Rifkind, published in his review for The Times the following:

While Dan Jones wrote in his review for The Sunday Times:

Regarding the fans, opinions are pretty similar. Lots of readers love this book while others (I would say the less) think it’s boring. Seems like either you love this book or you hate it. If you ask my opinion, so far I`m loving it (I haven’t finished it yet). But also, I think this book should have been published after A song of Ice and Fire saga was fully written.

In conclusion, if you are a fan you must read this book. Dragons, Targaryen and mysteries resolved, what else you need to start reading Fire and Blood?

A song of Ice and Fire