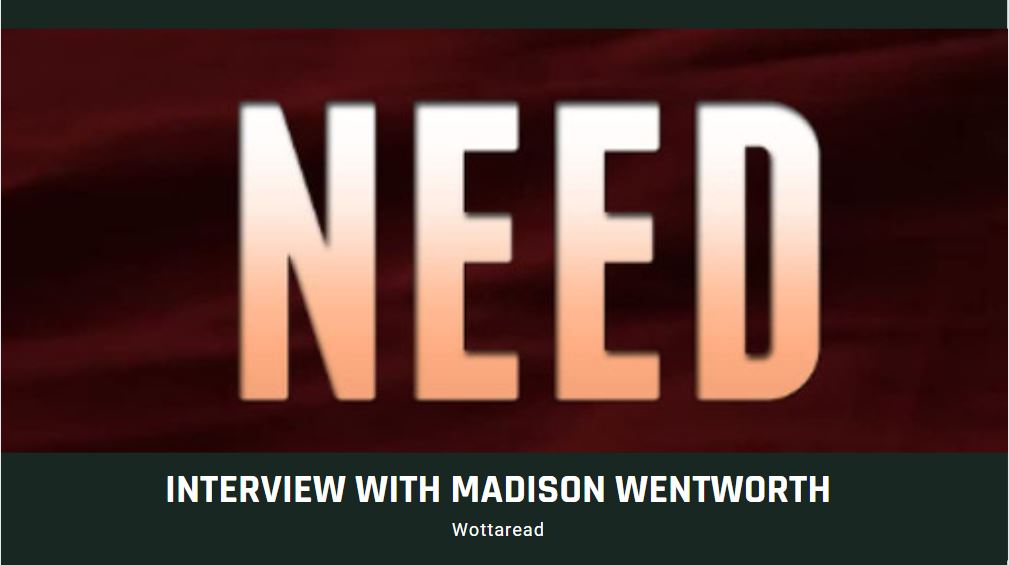 Here goes my interview with author Madison Wentworth, hope you enjoy it:

Book: “Magic Kingdom for Sale” by Terry Brooks. Writers create their own magic kingdoms and get to leave the real world and visit them, just like the main character in this book.

Movie: “The Sixth Sense,” because… that twist!

Song: “Magic” by Olivia Newton-John because it captures the essence of the relationship between Cherie and Evan in NEED.

I don’t do too many social things, because most of the time, I either end up sitting around being bored or pretending to be someone I’m not.

I try to write every day. I don’t have specific word-count goals; I rely on the story to pull me along. Since I have a job outside of writing, that dictates how much time I can spend.

Not directly, but real people serve as models for some of my characters. Several of the characters in NEED were based on loosely on amalgams of real people, and I put a lot of myself into the protagonists.

I don’t want to say I don’t have that problem, but I really don’t. I love to write, and I love to do research for my work. At any given moment, I’m either writing, doing chores, doing research for my writing, eating, sleeping, or often working my “other” job, which also involves happens to involve writing (I’m a freelance/contract copywriter and website editor).

Tell us about your book, what do you think is the most interesting aspect of it?

NEED is a classic love story, but with some unusual twists: He’s a ghost, there’s time travel involved, and both the main characters are vampires — although of an unconventional sort. There are some steamy scenes, too, and a strong element of adventure. But their romance and their desperation to be together undergird the entire story. I wanted the characters to share an intense sensuality that was the result of an even more intense emotional connection. Can the greatest of loves overcome the greatest of obstacles: death? That’s the question I wanted to ask.

At the moment, I’m focused on promoting NEED, because I’m extremely excited about this story. I’m not sure what I’ll write next. Whether I continue in the same vein will largely depend on the response to this story.

Hope you enjoyed this interview, also, don’t miss our latest post, in which you will find a list with Sister Souljah’s books in order, you’ll love her novels.