If you are a fan of this videogame series you have to read these books, and here you will find all the Mass Effect books in order so you can start enjoying this series. These novels have been acclaimed for their quality, some fans even stating that they are better than the videogames in terms of characterization and writing. Are you ready to start reading your first Mass Effect book?

Here you will find the Mass Effect book series in order, and together with that, we will recommend you the perfect book set to start reading this order.

Mass Effect books order: how should I start reading this series?

The best way to enjoy this series is to read the Mass Effects books in order of publication. That is, reading the tetralogy first and then reading Andromeda. Here are all the books in the original series, click on the cover to get any of them: After this, then you should start with the following trilogy, Mass Effect: Andromeda. Here you have the 3 novels: Glorious covers, don’t you think? as you see, they have the same vibe as the videogame series.

Now that you have the Mass Effect books in order, maybe you want to get all the books?

In case you would like to get all the Mass Effect books, here goes a 4.3 rated star book set which includes the four books in the Mass Effect main book series. Also, you have other related Mass Effect merch for you which fans usually get together with the books:

Do you enjoy books based on this kind of franchise? then this is not the only SciFi military series out there, here’s a list with the Halo books in order.

We are confident you’ll also find this post with the Assassin’s Creed books in order pretty useful.

A list of the Mass Effect book series in order

This is a handful list of all the Mass Effect novels that have been published so far: 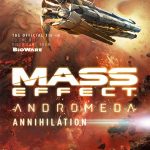 Anything I should know about this book series before I start reading it?

This series is composed of a tetralogy and a trilogy. The tetralogy is tie-in novel that is set in the universe of Mass effect, while the second one takes place during the events of the videogame Mass Effect Andromeda.

Mass Effect is a video game series created by Preston Watamaniuk, Casey Hudson, and Drew Karpyshyn. This is a third-person shooter developed by Bioware, with lots of military science fiction and role-playing elements.

The first title in the series, titled Mass Effect, was released in 2007 for Microsoft Windows, PlayStation 3,  and Xbox 360.

In these video games, we will explore several planets, and we are able to bring up two of our crew members with us. We will have to complete different missions like exploring areas, looting, or getting key items. While we complete these missions we will enter into several combats, in which we will have to take advantage of our weapons, technology and also using the environment in our favor.

Regarding the books, there have been different writers involved in this project, including writers such as N. K. Jemisin and Catherynne M. Valente. The books have been praised for their quality, and have received generally favorable reviews.

How many videogames of the Mass Effect series have you played? is it your favorite franchise, or is there any other that you think is way better? don’t forget to leave a comment so we can a super nice debate in the comment section.