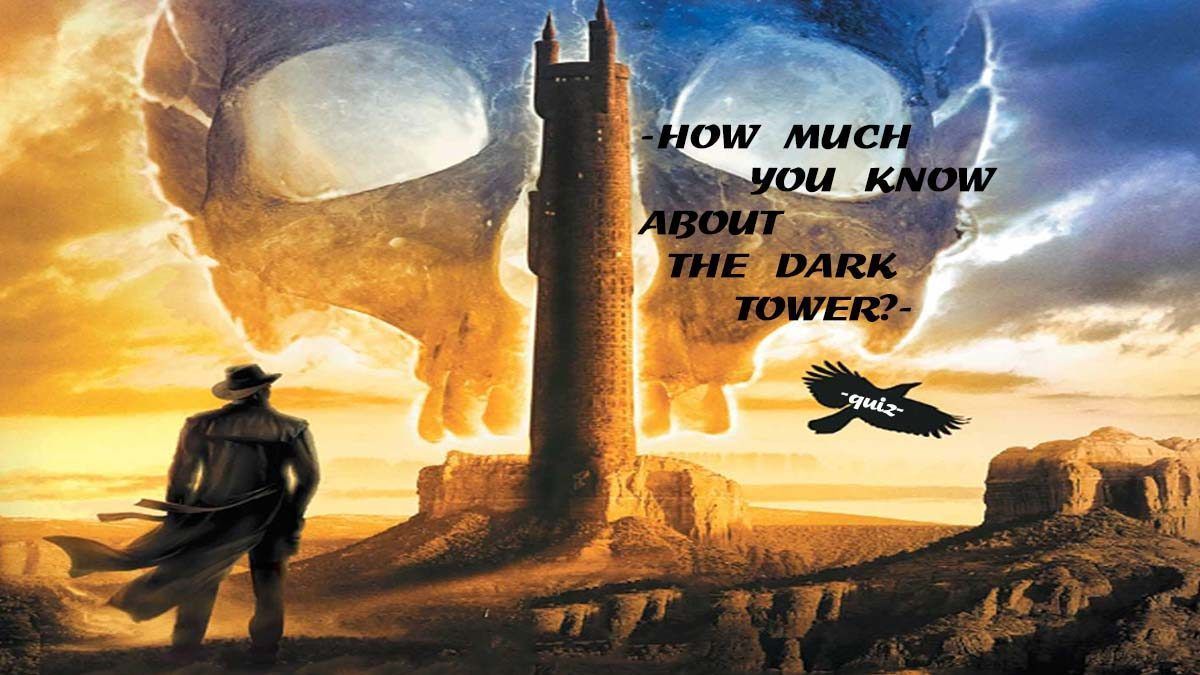 Hello Gunslinger! if you are a fan of The Dark Tower by Stephen King then this challenging trivia quiz is for you. 12 questions about this fantasy series written by one of the greatest horror writers in history.

Are you ready to face this trivia? get your guns and shoot as fast as only a Gunslinger can.

This word signifies life-force, consciousness, duty and destiny. In the vulgate, or low speech, it also means a place to which an individual must go.
Ka
Za
Ga

According to Stephen King, The Dark Tower was inspired, to some degree by a poem by Robert Browning. Which poem?
Childe Roland to the Dark Tower Came
The Ring and the Book
Dramatic Idyls

What is a Starkblast?
a severe storm, that in many ways is similar to a freezing derecho. Characterized by severe, sustained straight line winds and extreme cold, the starkblast begins in the polar latitudes of Mid-World.
a place of being that allows someone to travel between universes. It is not a "normal place" and is usually triggered by a powerful event or object.
a place where reality has been eroded away.

Aerlyn's Rainbow, also known as the Bends o' the Bow or Wizard’s Rainbow, consists of thirteen colored spheres. The first twelve represent the Twelve Guardians of the Beams, each having the secret of a different form of magic; the last, Black Thirteen, represents...
The Dark Tower
The Mid-World
The sorcerer Maerlyn

These creatures, also known as Low Men, are vaguely humanoid creatures who feature in the series.

Which of the twelve guardians set at the portals by the Great Old Ones is the subject of the childhood rhyme recalled by Roland in the wastelands that ends 'he loves the land and loves the sea and even loves a child like me'?
Maturin
Shardik
Navius

I do not aim with my hand. He who aims with his hand has forgotten the face of his father. I aim with my eye.

I do not kill with my gun.

Which of these is a known slow mutant?
Ralph
Peter
Jael

In which of these novels does George Latigo appear?
Wizard and Glass
The Waste Lands
Song of Susannah

In The Wolves of The Calla', the so called wolves ride out once in every generation to seize children from the village of Calla Brin Sturgis. From which land do they ride out?
Thunderclap
Lud
Kashamin

This character  once united all of Mid-World under his rule and it was known for a time as the Kingdom of All-World.

The Sandalwood have a ... engraved in the side
Rose
Wolf
Fang

These creatures have the ability to mimic what they hear. They are particularly sensitive to the approach of a Starkblast, and will face north when one is coming. They are also well known for their friendliness, even in the wild.
Billy-Bumblers
Succubi
Grand Featherex

Which of these numbers is important in The Dark Tower series?
19
21
20

A sentient monorail that went insane over the course of its long lifetime. He became suicidal and attempted to kill Roland and his ka-tet in his suicide, but was ultimately defeated
Blaine the Mono
Eddie the Mono
Karl the Mono

Where your results as good as you expected? Share them then!

How did it go? was it easy or too hard? The Dark Tower is a long series with lots of detail, it’s written by Stephen King after all, so it might be hard to retain so many aspects of the story and the lore.

Want to know your character of The Dark Tower? then do this personality quiz!

Time to find out which character you are, just clic on the following image to start your personality quiz of The Dark Tower:

Don’t forget to share your results on your social networks so you can show others how much you know about this series! and also, you can use this quiz to challenge any friend who has ever boasted was an expert in The Dark Tower series, let’s see who gets better results in this trivia quiz and is the real Gunslinger!

Want more fun quizzes like this The Dark Tower quiz?

If you liked this great book quiz you will love these other fun quizzes, there are both trivia and personality tests at your disposal. Just click and start having fun with these other quizzes:

So many quizzes right? I think this one about which Discworld character are you will be one of your favorites!