The next Game of Thrones: Which of these will be the heir?

Got’s last season ended, and with its conclusion comes a disturbing answer for most, what to watch after Game of Thrones? Season 8 might have left a bitter taste for some, even so, we want more big productions filled with fantasy and epic tales, we need a replacement and we want it as soon as possible! Which tv fantasy series will become the next Game of Thrones phenomenon? here are the best candidates!

Game of Thrones has been such a success that production companies are seeking new tales that will be as acclaimed as George R.R Martin’s work. Thanks to this, a lot of tv series adaptations are on the way. The fantasy Audience is just getting started, we only need to fill the void. In order to find Got’s best substitute, we have to take into account some of the features that made this epic story so acclaimed: epic battles, magic, dragons among other magical creatures, intrigue, great dialogues and of course, appealing characters. We want a show that despite being unique is also similar to Game of Thrones, impossible?

What will be the next Game of Thrones after it ends? Upcoming Fantasy tv series:

If you don’t know what to watch after Game of Thrones, here are some upcoming tv show alternatives for you:

The Witcher is produced by Netflix and will have Henry Cavill as Geralt of Rivia. This production has a lot of potential to become the next Got because this series by the polish writer Andrzej Sapkowskii is known by its violence, sex scenes, fantastic creatures and marvelous dialogues resembling so to Got’s tone.

If you want to know about the cast, release date, and all the updated info about this epic story you can check this previous article: all you need to know about The Witcher show by Netflix

Lord of the Rings

This tv series adaptation of J.R.R Tolkien’s Lord of The Rings will be set in the Second Age when the Rings of power were forged and Sauron rise to power in order to subjugate the Middle Earth. With the highest budget ever in a television show, this Lotr tv adaptation is probably one of the strongest contenders of the list.

Producers already confirmed this tv show will be set in the Second Age, as a result, most of our beloved characters such as the hobbits, Aragorn, Legolas or even Gandalf will not make their appearance in this tv show. Even so, having Sauron in his quest to conquer the Middle Earth sounds like an interesting enough plot to watch this show, isn’t it?

Here you have updated info about Lotr Amazon tv series.

His Dark Materials follows the figure of Lyra Belacqua as she travels to different universes. yeah, this is a multiverse story, like the new Marvel Cinematic Universe approach, interesting uh?  this franchise failed as a movie adaptation, however, BBC will give this amazing story a second chance. His Dark Materials tv adaptation is set to premiere at the end of 2019, let`s wish this show to have better results than the movies!

The Name of the wind/The Kingkiller Chronicle 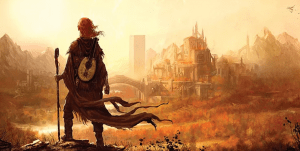 As it happens with Amazon’s LOTR adaptation, The Kingkiller Chronicle tv series will be a prequel of the original series. Meanwhile, the story of Kvothe becoming a legend will be adapted on the big screen. There is not still a lot of information regarding this adaptation, however, there’s a lot of expectation.

Rumors say the tv series will follow Kvothe’s parents, which may sound pretty odd for most since his parents, being the leaders of the Edema Ruh troupe, does not sound as intriguing as knowing how Kvothe became a hero.

Click here if you want to know more about The Kingkiller Chronicles.

The Wheel Of Time

The Wheel of Time tv series is based on the saga with the same name written by Robert Jordan. This is another project produced by Amazon and will be centered on the first book in the series. Given that the original work is composed of 13 books, there is a lot of material to adapt.

See here if you want updated info about The Wheel of Time tv series.

The Watch will be set in Ankh-Morpork, one of the main and best-known cities for all the fans of the Discworld novels. What? you don’t know about Discworld? then here’s an introduction to Discworld novels.

Queen of Shadows is a television series based on the Throne of Glass book series written by Sarah J. Maas’. This show is named after the fourth book of the series, and it is currently being developed by Hulu. This show will tell us the story of Caelaena Sardothien, a female assassin with a dark past who will seek her freedom.

If you want to know more about Throne of Glass just check our guide!

If you miss  Game of Thrones, then this upcoming tv show is for you. It is difficult that Game of Thrones spin off series will become as popular as the original tv series. However, no doubt HBO will give it a try. Multiple Got spin offs will be released in 2020. The story will take place in Westeros, however, it will be set thousands of years before the events occurred in Game of Thrones, another prequel show. By the way, his spin-off series is unofficially called The Long Night.

Why was Game of Thrones successful?

Got is one of the most scrutinized series ever. So many theories in order to resolve the misteries that were introduced along the plot of this epic fantasy story. Theories about Jon Snow being a Targaryen or guessing who would finally sit on the Iron Throne led to so many theories, some of them really crazy  most of them amazing to read.

George R.R Martin got inspiration for some of the elements of his novels from history itself. Wildfire for example is inspired in the Greek Fire , an incendiary weapon used in naval battles by the Bizantine Empire, Greek Fire continued burning even while floating on water.

Some say the Dothraki are inspired by the Hunes, the nomadic people led by Attila, one of the most fearful enemies of the Roman Empire.

At the same time, Game of Thrones follows the rules made by the father of modern fantasy: J.R.R Tolkien. Even though in a quite particular style since there is also this Shakespirian touch, with combined together make Game of Thrones (or A song of Ice and Fire for the readers) quite unique. Some characters such as Tyrion or his sister Cersei are probably the ones that more usually show the influence of Shakespeare in this series.

How many of these upcoming epic tv shows will you watch? share with us!