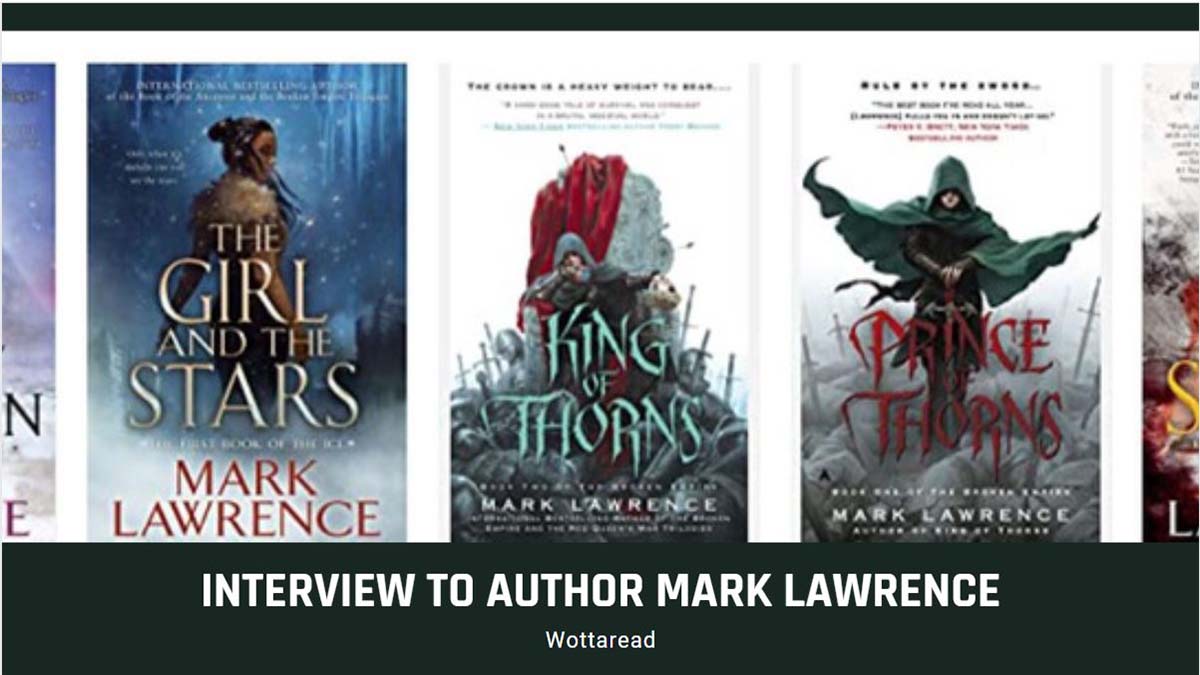 Hi there Wottareaders, today I’m interviewing fantasy author Mark Lawrence, most known for the The Broken Empire trilogy and The Red Queen’s War series. Let’s get to know him better:

Well, for starters, I tend to write short answers to interview questions. I’m a former scientist who now writes fantasy and scifi books for a living. I’ve sold nearly two million of them in around 25 languages.

I was born in America, raised in the UK. I did live in the States for a few years at the turn of the century. I’m sure all our experiences influence our storytelling – but I can’t point to any examples based on geography.

I never had an ambition to become a professional writer. I just wrote for fun with no expectation that I would be able to make a living at it. My success has been rather surprising to me. Friends pushed me into sending my debut, Prince of Thorns, to an agent. Things moved quickly from there, and ten years later, here we are.

I tend to like popular things, so:  Lord of the Rings, The Shawshank Redemption, Iron Sky – Paulo Nutini (just because, by chance, I’m listening to it as I type), The Last of us.

We’re built of contradictions, all of us. It’s those opposing forces that give us strength, like an arch, each block pressing the next. Give me a man whose parts are all aligned in agreement and I’ll show you madness. We walk a narrow path, insanity to each side. A man without contradictions to balance him will soon veer off.

Quote from King of Thorns.

I don’t. Occasionally I might take a real person’s attitude, or way of speaking, and give that to a character.

There’s no great science to it. I would just advise them to give it a go. Joining a critique group is a good way to get better.

I’m not a very excitable person and things that seem to have other authors dancing around the room really don’t have much impact on me. I think the best “writing times” I’ve had have just been hanging out with readers and other writers in the bar at events. The worst moments would probably just be interactions with awful people on social media.

I’m not a big procrastinator. If I don’t want to write then I don’t write. Generally, I just get on with it. I like writing. I do waste a lot of time on the internet though, when I could be writing instead.

Before Mark Lawrence tells us about his books and new projects, here you have the first volume of some of his series: 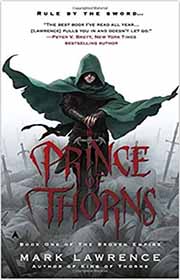 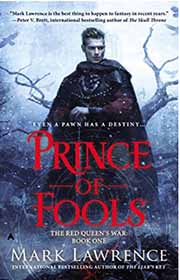 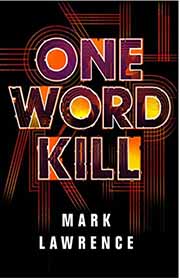 Let’s start with your newest series, The Book of the Ice, the second volume in the series was released in April 2021, what happens to Yaz in this sequel?

She goes on a long, dangerous journey.

So far, all your book series have been a trilogy, will The Book of Ice be a trilogy as well? If so, is there any reason why all your series are a triad? or just a mere coincidence?

The Book of the Ice is a trilogy (like all my trilogies it was finished before the first book was published). I think trilogies match my attention span well. By the time I get to the end of book 3 I’ve always been ready to move on to something new. I wouldn’t want to stick with a character for 10 books. And publishers love trilogies – so that works well.

Let’s get back to your first novel, Prince of Thorns, what were your first thoughts when you realized people were really enjoying your book?

I was a bit surprised by how much they were enjoying it, but I’d already had plenty of feedback from my critique group, then my agent, then my publisher, and so I was used to a good reaction. I was more surprised by the controversy and condemnation – though ultimately that probably helped fuel the book’s success.

Also, Paramount Pictures acquired the rights to The Broken Empire a few years ago, do you have any particular actor in mind to play the role of Jorg Ancrath? Or maybe any other character that you have an actress or an actor you think would be the perfect fit?

-That’s news to me J The option for film/TV rights was sold to a group (not Paramount Pictures) and has some months to run before it reverts to me or has to be renewed. The option is different (much cheaper) than the rights though.

In any event, I’m just avoiding the question since the names (and faces, and existence) of young actors slide from my mind before the credits have finished rolling, and so I have no idea who could play Jorg. To do him credit it would take quite some actor – he’s a complicated young man!

Of all your books, which one is the most special for you?

The cliché is that this is like picking between your children. It’s a cliché because it’s true. I tend to select The Red Queen’s War books, starting with Prince of Fools, as they are my least commercially successful books, but I had enormous fun writing them and they have a dedicated following.

I’m writing a story about a library!

Thanks to Mark Lawrence for answering my questions, and thanks to you Wottareaders for being there, hope everyone had fun!

Also, take a look at my latest interviews: here’s an interview to author Aliya Whiteley, and here’s another one to Rachel Neumeier, author of the Tuyo series.