How to read Riyria by Michael J. Sullivan

Currently, there are three series that take place in Elan, the fictional world where Riyria is set. These series are:

Riyria Revelations: this is the original series, the ones that started this epic fantasy series. This series is composed of the following books Theft of Swords, Rise of Empire and Heir of Novron.

Riyria Chronicles: a prequel to Riyria Revelations, occurring ten years in the past. Composed of The Crown Tower, The Rose and the Thorn, The Death of Dulgath and The Disappearance of Winter’s Daughter.

Legends of the First Empire: a series also set in the world of Elan but taking place 3.000 years before the events of the original series. Composed of Age of Myth, Age of Swords, Age of War, Age of Legend, Age of Death and Age of Empyre.

Notice that Legends of the First Empire takes place a long time ago, as a result, not only all the characters are different, but also the cultures and technology.

In what order should I read Riyria by Michael J. Sullivan?

According to the author of this epic fantasy novels, Michael J. Sullivan, the best way to read the Riyria books is in publication order. Here is the reading order then: 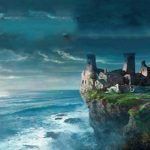 Some readers suggest reading this series in chronological order. For those who want to give a try to this approach, you just have to read these three series oppositedly to publication order, that is, first Legends of the First Empire, then Chronicles and lastly Revelations.

If you were wondering what is the best order here you have the answer. Keep reading!