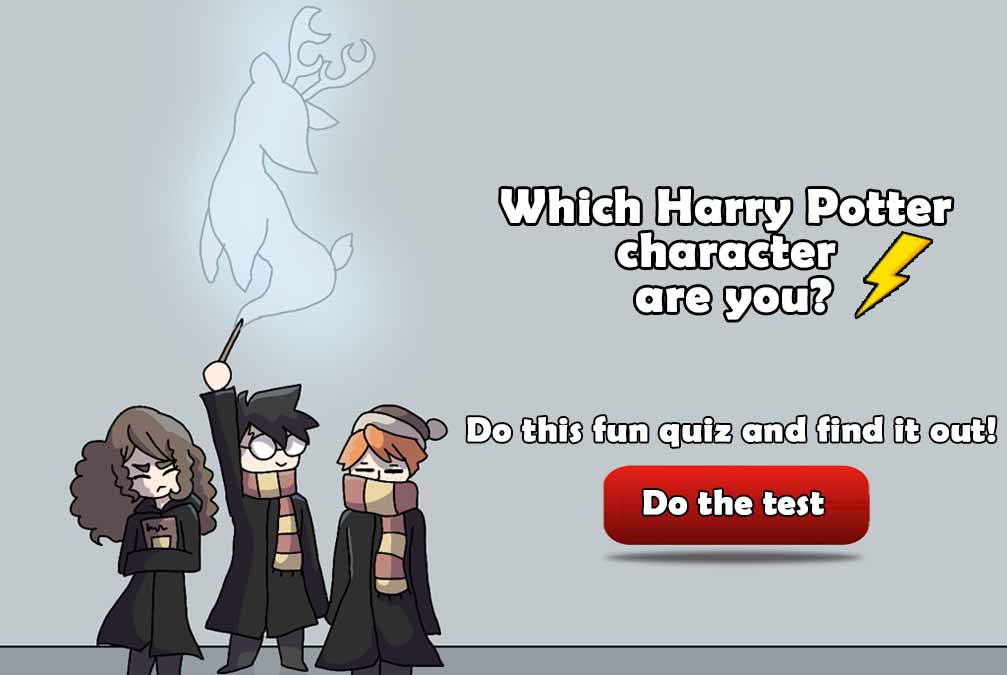 Have you ever wondered which Harry Potter character are you? it’s time to know the answer by answering some fun questions! who will you be? maybe the very same Harry? or maybe Lord Voldemort? yes, we dare say his name!

With this incredibly fun Harry Potter personality quiz you will know which character from this popular series by J.K. Rowling you are.

What Harry Potter character am I? personality quiz

It’s easy, just answer all the questions (you will have to be honest in order to know which Harry Potter character you really are of course). Let`s do this! just press start and let the quiz begin!

You just got an email, the subject says: Congrats, you are now a student at Hogwarts, how do you react.
Open the email and read it, who knows?
Delete it
You read it just to have a good laugh

On which of these Hogwarts' subjects would you excel at?
Defense against the Dark Arts
Potions
Herbology

Which of these characters would you rather kill?
Lord Voldemort
Beatrix Lestrange
Dolores Umbridge

At which Quidditch position you think you'd be better at?
Seeker
Chaser
Beater

Which creature would you rather be?
Werewolf
Hippogriff
Gnome

Which of these deaths saddened you the most?
Dumbledore's
Snape's
Sirius Black's

A dementor! how do you react?
Expecto Patronum!
Use your Firebolt and flee
Cast the apparate spell and get to a safe place

which harry potter character are you

The result of my test was %%personality%%

So, what Harry Potter character are you? did you get the one you expected or not? just leave a comment and tell us if you have any kind of resemblance with the character you got on the quiz.

Maybe you didn’t like the character you got? if that is the case you can always do the quiz again, but answer the questions differently so as to get a different Harry Potter character this time.

Did you enjoy this Which Harry Potter character are you quiz? there are more here!

We love Harry Potter, that is why you will find some other fun quizzes here. Just choose your favorite or, better, just do them all!

Controversial Food choices: which Hogwarts House Would You Be In? -Quiz-

Harry Potter trivia questions: how much you really know about HP series?

What is my patronus test, find it out!

Lots of cool quizzes, don’t you think? if you are bored this is a great way to get yourself entertained for quite a while. At the same time, it’s always amazing to revisit the Harry Potter series. Did you hear that HBO is planning to produce a live-action series? what do you think about this project? are you willing to watch it or you believe this production won’t meet your expectations?

Understanding the phenomenon behind this series

The Harry Potter books are one of the bestselling fantasy series of all time, and their popularity went through the roof after the movies were released. Some HP fans say the movies do no justice to the book series, however, while it’s true that there are some significant changes between the original source and the movie adaptation, the films are still a great portrayal of the story and the cast fit perfectly for the characters.

The first movie in the series, Harry Potter and the Sorcerer’s Stone, had a rating of 7.6 stars out of 10 on ImdB. Similarly, the main cast  Daniel Radcliffe, Rupert Grint, and Emma Watson; have been praised on several occasions for their stunning performance.

Despite the fact that J.K. Rowling concluded the Harry Potter series a long time ago, her books are still on shockingly high positions at lots of bestselling book lists. Which just proves that Harry Potter has yet lots of magic for kids (and, let’s face it, lots of adults too). What age were you when you read your first Harry Potter book? were you a kid or an adult at that time?

We always say that this series is not just for kids. True, it may be addressed to them, but adults will enjoy it as much if not more. The same happens with the Star Wars Jedi Academy books, which may be for children as well, but you bet you can enjoy them even as an adult!

So, which Harry Potter character are you? leave a comment and tell us which one of all the fascinating characters in this series by J.K. Rowling you got! Also, you can confess how many times you did the test to get the character you wanted!