imredwright
To the Big Screen 9 Comments

Mortal Engines 2 will not happen, the reasons why there won’t be a sequel

Let’s face it, Mortal engines 2 will not see the light? but why you ask? Now that months have passed since the release of the first Mortal Engines film it’s time to talk about a movie that turned out to be one of the major flops in film history. Mortal Engines, based on the novel of the same name by author Philip Reeve. It would be time for the Mortal Engines sequel to be filmed, however, this is not happening.

A critically acclaimed book series becoming a box office bomb. How is that even possible? The worldbuilding of Mortal Engines was a great basis, the story is also intriguing. A great steampunk story (which is included in this list Best steampunk novels). In conclusion, the source material is just excellent.

Then, what happened? is the Mortal Engines sequel an ongoing project at least? You can stop searching for the Predator Gold movie release date because it’s unlikely to happen.

Mortal Engines 2: will there be a second mortal engines movie?

The first Mortal Engines movie, directed by Christian Rivers and released in the USA on December 14, 2018 was expected to be a success. And it made sense they thought so, for various reasons:

Of course, when your script is based on a best-seller, your grossing expectations will be way higher than also. Oppositely, there will be a more demanding audience and two different spectators to content: the readers, who expect a worthy adaptation of a world they already know about; and the ones who don’t know about the book series, who will be in need of a proper worldbuilding explanation. Sometimes it gets hard to get that balance, in bestseller movie adaptations being able to make everyone happy is not an easy feat.

Where is Kingkiller book 3? We want Rothfuss’ new book now!

The next Game of Thrones: Which of these will be the heir?

Peter Jackson not only directed The Lord of the Rings movies but also these movie adaptations are on the list of the highest grossing fantasy movies of all time. Having such a persona supporting a project surely is a major asset.

Mortal Engines had Peter Jackson as a claim, even though he was not the film director but instead, his role was as a producer and co-screenwriter.

One of the book’s premise draws your attention: Predator cities

You might love it or hate it, but seeing cities moving and devouring other cities is striking no matter what.

A similar budget to other big productions such as The Lord of the Rings: The Fellowship of the Ring with a Budget of $93 million or Harry Potter and the Philosopher’s Stone with a $125 million budget.

Given such favorable conditions, one would expect this movie adaptation to be a major success. Was it? Not at all.

Mortal Engines Box office, the reason why there won’t be a sequel

Mortal Engines grossed $83,614,964 worldwide ($16 million in the United States). As a result, this movie adaptation didn’t even recoup its production budget. Mortal Engines’ theatrical run was not precisely good, it flopped.

So yes, people went to the cinema, but not to watch Mortal Engines.

A film can underperform for several reasons, sometimes the negative word of mouth or external circumstances, as would be the timing of the film’s release, are to blame. But this does not seem to be the case. True, Spider-Man: Into the Spider-Verse and The Mule turned out to be more than worthy competitors. But Mortal Engines had so much on its favor it would be absurd to think its flop was mostly due to issues unrelated to the film itself.

The reason Mortal Engines  movie was a Box Office Bomb

Basically, Mortal Engines movie failed to deliver. The film adaptation turned off the spectators, the book fans weren’t satisfied, while the ones who didn’t know about the novels weren’t either.

For some, it all started wrong, the trailer was not appealing at all. The general opinion was “The trailer looks terrible”. Given how important a good movie trailer is since it’s one of the main ways to attract an audience before the release of the film, things couldn’t have started worse.

While the books are addressed to kids, the movie was more focused on a Young Adult audience. Some say the audience is a bit tired of dystopian, young adult book series after The Hunger Games or the Maze Runner movie adaptations.

While the concept of cities devouring cities might sound shocking, it can also seem a bit simplistic and absurd if it’s not properly explained. Which, I assure you, the book explains perfectly well.

No matter the source, the general opinion is the following:

Tomatometer: 26%. A bad review is denoted by a rotten green tomato splat (59% or less).

As you see, the film did not rise to the challenge of its original source

Here are some critic reviews of Mortal Engines movie:

“The story is bloated and, despite flashes of imagination, overly familiar. And the dialogue, peppered with well-worn catchphrase.” Washington Post

The film has a kind of family resemblance to The Lord of the Rings movies, as you’d expect, but it’s shorter than any of those (about two hours, plus credits). It reminded me of the original Star Wars, too. It’s tremendously well paced; intense action sequences come at you pretty regularly but don’t hang around long enough to outstay their welcome, and they’re punctuated by quieter bits which are often surprisingly affecting.

This is not always the case, J.R.R Tolkien’s son (Christopher Tolkien) stated that Peter Jackson’s movie adaptations of his father’s work had “eviscerated the book”. Were the films that different from the books to make Tolkien’s son say this? Here you have Lord of the Rings book vs movie.

Similarly, Rober Riordan (author of Percy Jackson & The Olympians series) was not happy at all about the movie adaptation of his novels, a project that eventually got canceled. Percy Jackson’s author even posted the notes he had sent to the film producers and which they didn’t take into account and therefore: Percy JAckson movie

Will there be a Mortal Engines 2?

The second book in Mortal Engines series, Predator’s Gold, might never have a movie adaptation. Even though there has not been any official announcement regarding this issue, it seems pretty unlikely that Mortal Engines 2 will be released someday after the losses of the first movie.

Peter Jackson was asked about a Mortal engines sequel:

“I hope so. We have no idea. Because it is totally in the hands of whether the film does the business that would warrant more. But that is four movies I would love to see for sure. We have the first one, I would definitely love to see the first 3 for sure.”

It seems that having an entire movie adaptation of this steampunk tetralogy series is quite improbable. But who knows? Maybe a Mortal Engines sequel is still possible.

The alternative to Mortal Engines 2: read the books to know what happens in the sequels

Given that a Mortal Engines sequel is not likely to be filmed, you can always read the books, which you will enjoy for sure: 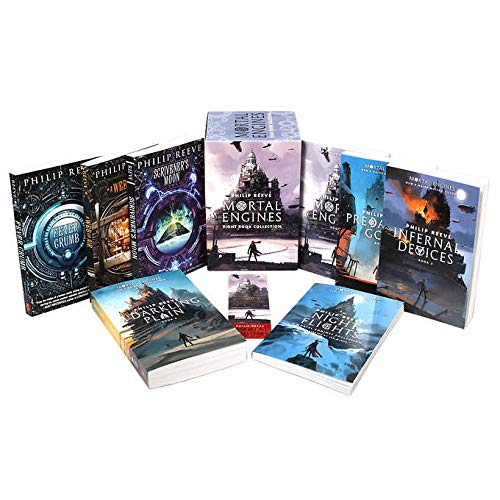 Even if you didn’t like the film, you really should give the book series a try. They are worth reading.

Did you like the first film? do you think they should film Mortal Engines 2 or do you think the firt movie was bad and does not deserve a sequel? leave a comment now telling us what you think about this adaptation.

9 Comments on "Mortal Engines 2 will not happen, the reasons why there won’t be a sequel"